The Future of Drone Racing 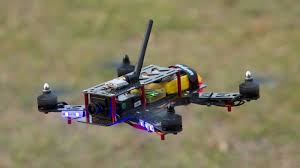 The Future of Drone Racing

It is said that drone racing is going to be the sport of the future. Have you ever heard of the first National Drone Racing Championship? This is something many people don’t realize exists. There was also the World Drone Prix in Dubai – the winner, a 15-year-old boy from England took home a total of $250,000, who just happened to be a member of our club here in Taunton, Somerset!

Throughout the world, there are dozens of drone races being held every month. Yet, despite it all, as of right now, no one has taken the steps to bring this sport to the mainstream.
Regardless of how you stack it, there’s no denying the fact that there has been a large amount of growing excitement nesting around the prospect of drone racing becoming a new sport – with this, competitors will race against each other with their futuristic sounding vehicle, the drone. There are small quadcopters that are controlled via a remote – they’re very agile and can move at speeds of one hundred miles an hour.

Unlike with most of the other racing sports, like horses and cars, there is no human on the drone (of course). Instead, the pilots will be standing to the side, with goggles on as they’re steering the drone based on a video feed that comes from a camera mounted on the nose of the drone. The name given is FPV racing – if you’re a gamer, you may have heard this term before – it stands for first person view.

Many times, the audience isn’t able to keep track of the drone – instead, they see little black specks flying through the air, making them hard to pick out against the background. Drone Racing League developed a solution to this – they place colorful LED lights and matching rotors on their drones – this way, the drones pop against the background, making it easier to tell them apart.

Here we are, in the Pokemon Go future-present, but it’s drone racing that could be the next big hit. Exports are already worth thousands of dollars. The Drone Nationals attracted a large amount of people and some blue-chip sponsors, like GoPro, DJI and AIG. Looking at the statistics, drone sales over the past year were four times more than what we saw last year during the same time. It has been estimated that the sales in 2016 were nesting at 1.9 million. We can naturally assume that this hype with drones and drone racing isn’t going to die down anytime soon as it’s just getting started.

About the Author John